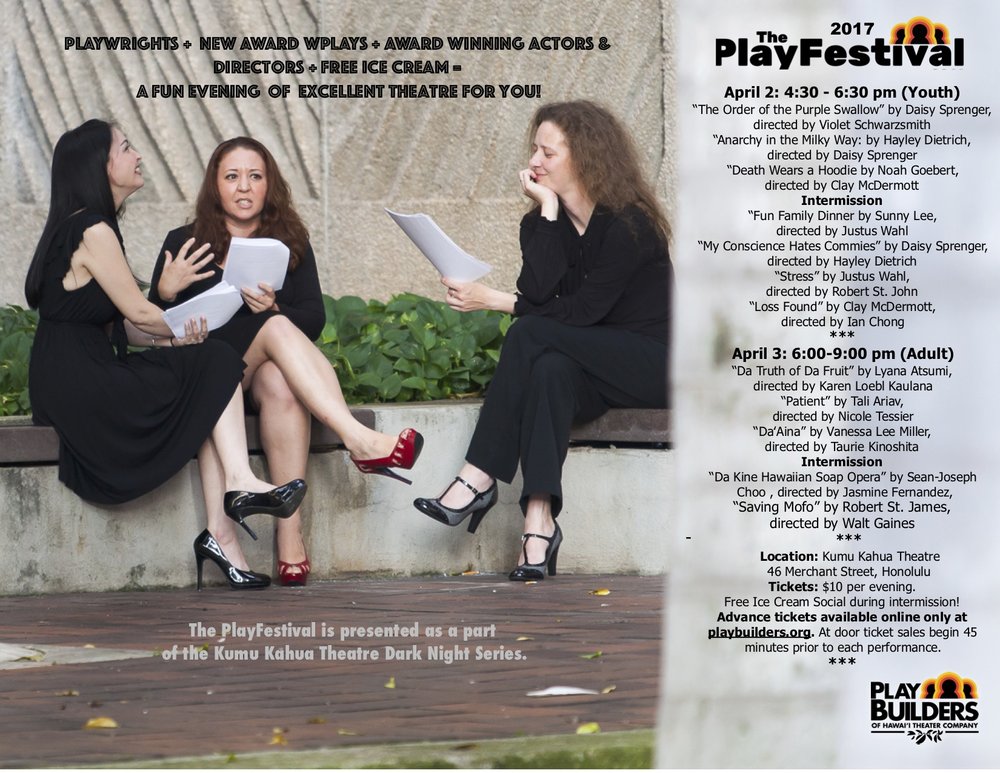 ​The PlayFestival 2017's annual play submission window is now open and we are calling for original, 10-Minute plays, one acts- (30 minutes or less), or portions of full length plays, no longer than 30 minutes from adult playwrights and 15 minutes or less from youth (6th through 12th grades). All submissions must be emailed to playsubmissions@playbuilders.org by December 15, 2016. Hard copies will not be accepted, Plays will be judged and selected by a play reading committee. Playwrights shall be notified of selection by January 24th, 2017. This years “The PlayFestival” will be held at Kumu Kahua Theatre on April 2nd,3rd, and 4th, as part of their dark night series.

This is PlayBuilders' 6th annual play festival, and several participants in the past, including Mark Tjarks (Houseless in Paradise) and Kirstin Trombetta (The Waipahu Project), have been commissioned by PlayBuilders to write our community-collaborative plays. In addition, other theatre companies have selected plays featured in our festival to part as part of their seasons, including, Jan McGrath’s Outage and Nancy P. Moss’ Will the Real Charlie Chan Please Stand Up, which was produced by TAG and Kumu Kahua Theatre in 2013.

Kumu Kahua Theatre's Dark Night Series was created to offer other theatre groups, playwrights, and performance artists the opportunity to present their work to the community. The PlayFestival 2016 is being presented during dark nights, evenings when Kumu Kahua’s regular season shows are not being performed. To be part of the Dark Night Series artists must submit a proposal, which is reviewed by the Board of Directors of Kumu Kahua. From these proposals, projects are chosen that Kumu Kahua feels will promote the development of the theatrical arts and benefit local artists. Kumu Kahua sees this as another way to enhance and enrich the cultural diversity and artistic climate of Honolulu.

PlayBuilders of Hawaii Theatre Company gathers and shares real stories that resonate with, empower, and connect individuals throughout the culturally rich and diverse communities of Hawai'i.

PlayBuilders of Hawaiʻi Theater Company is pleased to announce the winners of The PlayFestival 2017 held at Kumu Kahua Theatre, as part of their Dark Night Series.

Twelve plays, written by both youth and adults, were presented on Sunday, April 2nd and Monday, April 3rd. The PlayFestival is an annual event that has been organized by PlayBuilders of Hawaiʻi Theater Company over the past 6 years.