THIS PROJECT IS SUPPORTED IN PART BY THE ATHERTON FAMILY FOUNDATION, THE COOKE
FOUNDATION, LTD, THE NATIONAL ENDOWMENT FOR THE ARTS & with in-kind K0KUA FROM
THE HAWAIʻI ARTS ALLIANCE, KUMU KAHUA THEATRE, AND THE University of Hawaiʻi at
Mānoaʻs Department OF THEATRE AND DANCE.  To find out more about how the National Endowment for the ARTs grants impact individuals and communities, visit www.arts.gov.


Mahalo nui loa to Kumu Kahua Theatre, and The University of Hawaiʻi at Manoa for their kokua. We are currently working to make "Open Your Hearts Wide Available" to Hawaii schools though special programing. For more information check under past projects at the top of the page.

Extra! The response has been so overwhelmingly positive,
that We extended the run to June 30!

PLEASE NOTE:
Once you have purchased a ticket, you will receive a viewing link and a unique activation code in your confirmation email. Use this link to access the secure viewing site. Once activated, your viewing link will allow unlimited viewing for 24 hours from the time of activation.  To watch the show, just click the Start Stream button at any time during that viewing window. You can pause, fast forward, rewind, or  start from the beginning.

a free copy of the script is available for the hearing impaired by contacting Terri Madden at terri.madden@playbuilder.org

About Open Your Hearts Wide 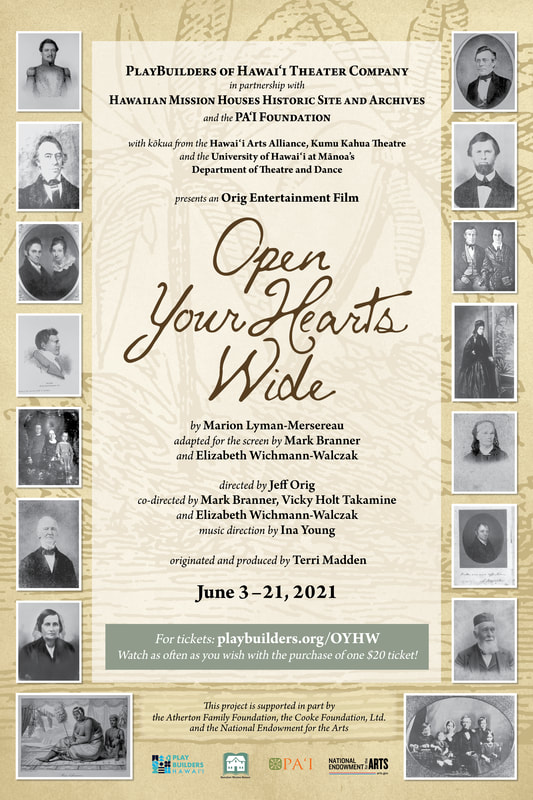 After Cook arrived to the Hawaiian islands on January 18, 1778, it did not take long for more ships to arrive carrying with them not only sailors, but whalers and business men as well.  These men brought with them disease that would decimate 71% of the population by 1820. What had once been a self-sufficient, pristine, healthy country was no longer the same.

Forty years later, soon after the Kapu system had been abolished, 7 American Board of Commissioners for Foreign Missions missionary couples arrived, seeking permission to land.

This film covers the early years of the Missionaries arrival and explores their contributions and the relationships they had with the Aliʻi. Based on the recently transcribed Aliʻi Letters and several story circles that took place with Missionary descendents between 2018 and 2019, "Open Your Hearts Wide"  is almost 4 years in the making.

Two more films are planned for the future. The second will be told from the Hawaiian perspective, and a third film will bring the both groups together in hopes that by approaching history together as a community, we can come to a better understanding, not just of the past but of our future as well.
​

The Story
Kimo and Malia have very different opinions regarding early Protestant Missionaries to Hawai‘i. Kimo thinks they were selfless heroes who did wonderful things for the Kingdom of Hawai‘i and its people. Malia thinks they were entirely self-serving and acquisitive people bent on manipulating and profiting off them and their land. While passing by the cemetery at Kawaiahaʻo Church, Kimo and Malia hear a beautiful voice emanating from the Hawaiian Missionary Houses Historic Site and Archives. They follow the voice and meet a friendly “Docent” who invites them to go on a tour. While being shown around the old buildings and quiet grounds, they continue to argue. But ghosts of both the early missionaries and the Ali'i appear and show Kimo and Malia more than they ever imagined. The Docent helps them to zoom with missionary descendants to hear more, and even Siri and Alexia chime in from time to time. Perhaps history is not as black and white as they thought it was, but is actually much more colorful and complex?

The Community Collaborative Way
OYHW Was Created
Several years ago PlayBuilders of Hawaii Theater Company began partnering with Hawaiian Mission Houses Historic Site and Archives to create a community-based play with Hawaiiʻs missionary descendants in order to acknowledge the 200th anniversary of the arrival of the first missionaries aboard the Thaddeus in in 1820, and commissioned playwright and missionary descendant  Marion Lyman-Mersereau to write it.

Marion spent the next two 2 years asking fellow descendants one simple question, which was, "What is it like to be a descendant, and what do you think of your ancestors?" After the first draft of the play was written, PlayBuilders invited the community member descendants (or cousins as they call themselves) to listen to a reading and share their own thoughts and ideas about the play. Because of the pandemic, it was not possible to invite them to a live reading, so we offered them a beautiful audio reading of the play on Patreon and a Google survey to share their reactions. Marion took those suggestions and completed the play with those comments in mind.

​Of course, we hoped that we would be able to produce a live production as we always do, but but because Covid-19 had different plans, we hired Jeff Orig of Orig Entertainment and turned Marion's play into a film. The screenplay was adapted by co-directors Mark Branner and Elizabeth Wichmann-Walczack, with important input by co-director, and PA'I Foundation Executive Director, Kumu Vicky Holt Takamine.

PlayBuilders mission is to gather and share real stories that resonate with, empower, and connect the many culturally rich and diverse communities of Hawaiʻi.

Mahalo Nui Loa to the Following for their Kokua: Open Your Hearts Wide is supported in part by the Atherton Family Foundation, The Cooke Foundation, LTD. and the National Endowment for the Arts.

For more information please go to:

For “Open Your Hearts Wide” program please go to:
https://www.onthestage.tickets/show/playbuilders-of-hawaii-theatre-company/open-your-hearts-wide-71573