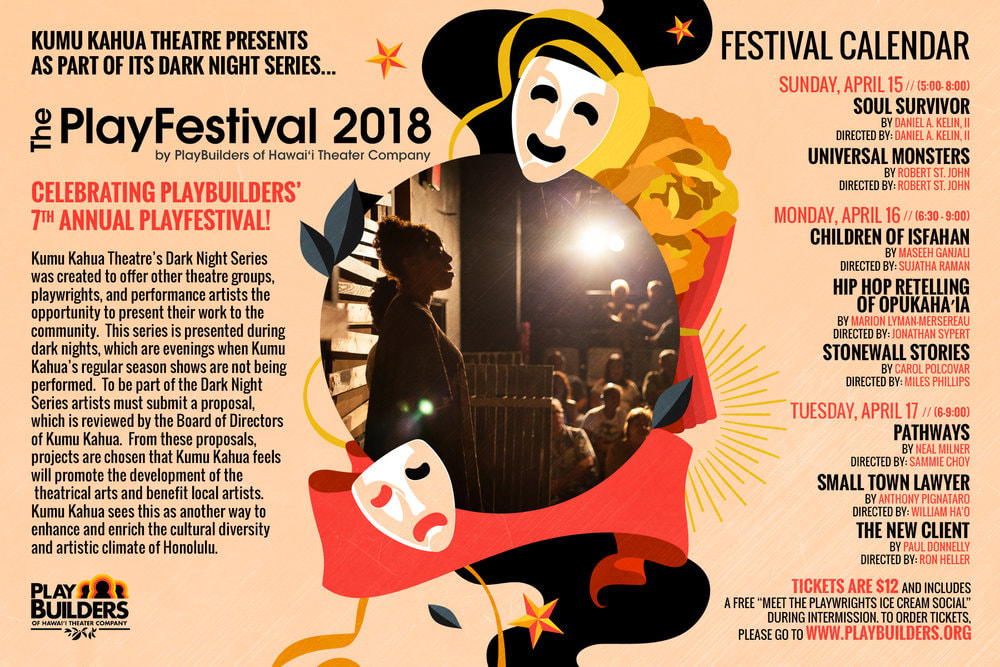 The 8 plays featured in the festival this year were selected from dozens of entries submitted to PlayBuilders’ annual playwriting contest which ran from October 2017 to February 2018.  A panel of professional theatre makers will adjudicate the plays to select the “Festival Best.” Audiences will also actively participate in the festival by selecting “Audience Favorite.”  "Winners" will be announced the week following the festival.

The PlayFestival has become an annual tradition and an incredible opportunity for local playwrights who wish to have their works seen and possibly produced.  Several Oahu theatre companies have chosen PlayFestival plays as part of their regular seasons.   Nancy Moss’ Will the Real Charlie Chan Please Stand Up, Marion Lyman-Mersereau’s Eddie Wen Go: The Story of the Upside Down Canoe,and Jan Shiarella McGrath’s Outage, were produced at Kumu Kahua Theatre, The Hawai’i Theatre, and The Actors Group respectively. PlayBuilders also uses this event as a means of finding and commissioning outstanding playwrights to write our community-based plays. Both Kirsten Trombetta, who wrote “The Waipahu Project” and Mark Tjarks, who wrote “Houseless in Paradise” are former PlayFestival participants.”

This year’s festival line-up is as follows:

Tickets are $12 and includes a free “Meet the Playwrights Ice Cream Social” during intermission. Tickets may be purchased at the door 45 minutes before the doors opened or purchased in advance by going to www.playbuilders.org.

For additional information please contact Terri Madden at  Terri.madden@playbuilders.org, or call her at 218-0103.